A Simple Cornbread Stuffing — with Cranberries, Apples, and Sausage 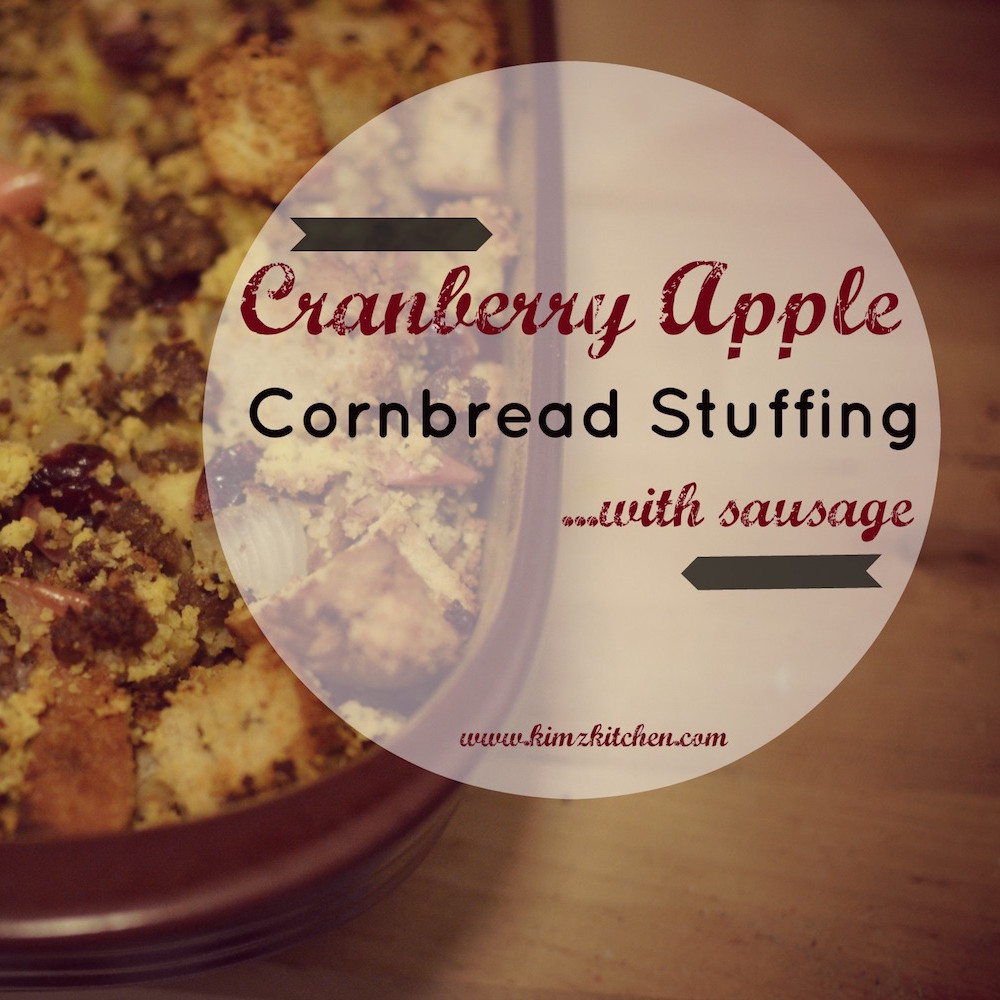 So I’ve been a little nervous about the holidays for several reasons. But sometimes my memories of childhood Thanksgiving dinners just overtake me with happy inside I can’t stand it. One of my memories is Thanksgiving at my grandparent’s house. My dad’s mom had four boys. This alone makes her a saintly creature. Each of her boys has wives and kids – and my cousins were everywhere! Second cousins and great aunts and uncles and in laws of the in laws would come. I’d always try to figure out who went with who as they came inside…but I usually couldn’t get it all down in time for the meal. It was such a happy time for all of us to walk up that big hilled driveway through the garage and pass the “A Fisherman and the Catch of His Life lives here” sign and through the door-that-was-always-unlocked. No one ever used the front door. Unless we were in the middle of a giant game of chase and needed an escape route. And if that house was ever locked, we could find the key by feeling around in the open brick wall on the other side of the garage. If we could squeeze ourselves around Grandpa’s truck.

We’d all squeeze into that house. And the love and laughs (there were tons of those!) would overflow right back out. There was a kids table. Usually in the kitchen (with the hard floor). There was a grownup table – usually two big plastic tables smushed together – brought in from somewhere – the attic or the basement workshop maybe?

There was never enough room for all the food. In the oven. Much less the table. The turkey would take up all the space in that small oven but of course all my aunts brought in their own things. My mom always brought in a hash brown casserole. And yeast rolls. Usually tensions would rise in that hot hot kitchen when my mom showed up with her rolls. Because that’s when the space ran out. But somehow everyone always forgot about those rolls every year. So, inevitably, all the food would be out on the counter (sometimes there was also fried chicken from somewhere?) – and my mom was somewhere in the living room saying “we’re just waitin’ on the bread!” Except no one was waitin’ on nothin’.

My Grandma had a dessert table. Always two things – pecan pie. And pumpkin. They were in the dining room away from the rest of the food. And Grandpa had a secret appetizer dessert course stashed in a cabinet – white chocolate red and green ball covered sprinkled cookies. When there’s so many people squished in one house, there isn’t much room for one busy mama or aunt or grandma or whoever-else-was-there to notice us kids taking those cookies. By the handfuls. Grandpa usually knew though. Which is why he’d hold the bucket in the living room in his chair.  If you could endure a few lighthearted jokes, and a few kisses, you could manage to stave off the hunger pains until those rolls finished.

My grandma and grandpa with their four boys. My dad is the one on the bottom right.

Then my grandma would yell over the loud chatter – “Ricky! Ricky! Pray for us son.” My dad always got picked! Well, sometimes one of my other uncles. But usually my dad. I used to think it was because he went to church the most of all the uncles. It was probably just because he was the oldest. It was the one quiet moment of the day. Then the noise levels would kick back in and everyone would talk about who took all the dark meat, who made those rolls again? Whether Grandpa spiked his ambrosia or not, and which of the four brothers was gonna walk away with the most $$ for Christmas this year.

That’s what I think of when I think Thanksgiving. I miss this more than any of my childhood memories. I’ve learned the hard way that my kids won’t have the same sort of memories with our living so far from family so often. So we make our own. And I’m learning that their memories are becoming just as important as mine are to me, even though they aren’t the same.

This year, in the midst of another holiday season, I’m thankful for memories. Happy ones.

Well, except for Grandma’s stuffing. I never liked that. (What kid does?) It was probably amazing and I just didn’t appreciate it.

Truth be told, I came up with my own stuffing recipe.  So, now if my grandparents were still alive. And we all gathered under that roof once more. I’d bring the stuffing. And this is the recipe I’d make.

I make up a quick batch of cornbread. I have my own recipe I use to make it from scratch, but the sweetness and ease of Jiffy makes this just the best.

While the cornbread is cooking (unless you’ve made it ahead of time!), cube two loaves of bakery bought bread. I like to use French and Ciabatta.

I like to bake it in the oven for 15 minutes at 425 degrees. To get it nice and dry and toasty. (So it’ll hold all the yumminess that’s about to be poured on top of it!)

Meanwhile, cut up your other ingredients. Two large apples, and one large onion.

Then while those are sitting on the counter, I cook up a pound of sausage. This is so so yummy. Usually somewhere during this sausage cooking my bread has finished toasting so I can take it out to cool.

Once the sausage is finished cooking, I’ll drain it and remove it from the pan to set aside, then add the chopped apples and onions. Cook them on low heat until the apples are a tad mushy and the onions are translucent.

Then I add my spices. I added 1 Tbsp of Basil and 1 Tbsp of Marjoram. But really any two of your favorite spices would work well together in this. I also tasted this and salted as necessary. Remember to season well because you’re about to add this to a lot of bland bread!

Add your toasted bread crumbs to a (very) large mixing bowl. Don’t forget your cornbread! Add that in there too!

Right on top of that bread, I add the sausage, the apple and onion mixture, and one cup of dried cranberries.

Then I add about 2 cups of chicken broth. And mix it gently but firmly. The cornbread will become pretty crumbly, but the other cubes of bread will hold their shape pretty well.

At this point, I’ll taste it a bit to check the seasonings. Then pour it into a 9×13 pan and stack it up high and pop it in the oven at 350 for about 20 minutes. Or until the top of it looks brown and toasty.

The apples and onion blend into the bread to make this deliciously sweet bread and the salty sausage cuts that sweet and takes it over the edge. You have to try this. You’ll be so glad you did it. And I promise it’ll be such a notch above anything store bought! Keep making those memories, though, storebought stuffing or not. They are oh so very important.

Happy Thanksgiving to all of you!!

(And for those of you who think my kitchen is neat like this for all these pictures. May I step back a few steps and show you what it really looks like right now? Keep cooking – even in the mess, girls. It’s all worth it.)

I mean really. I was making stuffing. So why did I need two things of sugar on my counter? Maybe because I’m thinking that bag will fall off?